Back in November, I noted that 99% of the questions I’m asked are related to HOCD. So I tried to write ONE GIANT REPLY (which you can read here), but it didn’t stop the questions from pouring in.

Frankly, I was exhausted and overwhelmed by HOCD questions, especially when I felt like I’d shared everything I could on the subject. But of course, everyone wants a personalized answer. I understand that, but I’m also not an HOCD expert or any kind of therapist.

So I let the questions sit for a while. Especially when I have a link to the above article right in the form where people can ask their questions.

But today, home sick on the couch, I wanted to tackle some more. A lot more. 🙂 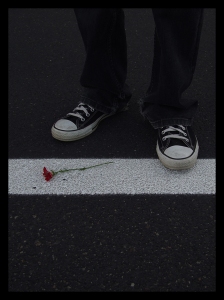 “Cross That Line” by xLadyDaisyx on deviantArt

It is SO HARD for OCD sufferers to be correctly diagnosed and then find the right treatment and a good cognitive-behavioral therapist.  In fact, it takes an average of 14-17 years for someone to access effective treatment.

That stat stings my heart.  I feel it deeply because of my own personal struggle.

I developed a sudden onset of OCD at the age of 7.  I wasn’t diagnosed with OCD until I was 22.  I started ERP (exposure and response prevention) therapy at 27.  That’s twenty years, folks– fifteen just till diagnosis alone.

Growing up, I just assumed that I “thought too much”– was an “overthinker” and especially sensitive to issues of morality. I didn’t understand that other people were also undergoing the same doubts as I was but were able to move past them with ease.  I, on the other hand, would get trapped.  The exit door to my brain was stuck shut, so all my thoughts just milled and churned and generated intense anxiety.  I didn’t know that others even had the same thoughts as I did, nor did I realize how it would be possible to let such thoughts come and go.

In childhood, I cried all the time.  In fact, I cried every single night for three years in a row.  I never told my parents about this.  I was so scared that they wouldn’t be able to “fix” me that I preferred to just rest in my own sadness, still clinging to the hope that *someday* I could be fixed.  As long as no one told me it was impossible, it still felt possible, and even thought I was terrifically sad, I kept that hope as my lifeline.

High school was a beast.  I got straight A’s (OCD drove me to perfectionism) and graduated at the top of my class.  I was a class clown, and I had some amazing friends.  But I battled intense spiritual doubts and lived in great fear.  My tenth grade year was one of the hardest of my whole life.  Only those closest to me knew it.

My doubts intensified in college.  They escalated to a whole new level.  Thankfully, I had a solid support system in my new friends (people who remain my support system to this day!).  And though they couldn’t understand what I was going through, they loved me.

After undergrad, things fell apart.  In a nutshell, I lost my grip on reality– my doubts had grown so large and out of control that I no longer knew if I could trust my friends or my own human experience.  Finally, for the first time in my life, someone used the words mental illness with me.  It felt shocking.

I was encouraged to meet with a therapist (unfortunately, a talk therapist– not effective for OCD), who also got me in to meet with a psychiatrist, and I was finally diagnosed with obsessive-compulsive disorder.  A diagnosis fifteen years in the making.

I spent about a year with that first talk therapist, and it was more damaging than anything else.  I finally “escaped” and never again set foot in that clinic.  Meanwhile, I was an SSRI lab rat, trying out a slew of various medications to treat my OCD.  I eventually went back to talk therapy– this time to a much better therapist, who was a true blessing, although she still didn’t truly understand OCD, and so my therapy included a lot of reassurances.  In other words, this kind, amazing woman who loved me was just reinforcing my compulsions.  Not good.  I also took a break from trying out medications after one stole all my energy and made me rapidly gain weight.  I was overweight for the first time in my life– all due to a medication– and have struggled with my weight ever since.

Five years after that initial diagnosis, my psychiatrist was out of ideas.  Literally.  She asked me what I thought we should do next.  I, of course, had no clue.  She referred me to an OCD specialist.

This incredible man– Dr. Suck Won Kim– changed my life.  He got me onto the right medication (almost immediately) and essentially required that I begin ERP, even giving me the name and contact information for the therapist who would ultimately allow me to bottle up my OCD and put a stopper in it.  Dr. Chris Donahue, to whom I’m forever indebted.

Twelve weeks was all it took.  In one sense.  In another, it took twenty years.

My life was a mix of depression, anxiety, compulsions, “bad” thoughts, and wrongness, and then twelve weeks later, I felt the burden of OCD lift from my shoulders.  I was giddy with freedom.  Five years later, I still am.

I hear from OCD sufferers every week who are in their 50’s, 60’s, or even older, who are still seeking appropriate treatment.  This absolutely breaks my heart.

On the flip side, I’ve had the incredible experience of meeting Maddie, 11, and her incredible parents, who leapt into action almost immediately and got her into ERP within months of her OCD onset.  In the same year, she developed OCD, was diagnosed, and was treated.  Marvelous!

That’s one of the reasons I blog about OCD.  To help people to understand earlier what they are dealing with and to encourage them to seek appropriate treatment (ERP, with or without medication).  It still just boggles my mind that in 2013, mental health practitioners still don’t know that ERP is the answer.  People get passed around from talk therapist to talk therapist, when the solution should be so ready, so available.

I have always been honest about my personal experience with OCD on this blog.  Faithful readers are well aware of my mama-bear protective instincts in regard to my medication.  I take Prozac, Effexor XR, and Risperdal each day and am utterly unapologetic about it.

That said, I completely understand that others have their own reasons (personal, medical, or otherwise) for avoiding medication, and that is perfectly fine by me (so long as no one tries to rob me of my meds, haha!).

People sometimes ask, Is it possible for me to treat my OCD and avoid medication all together?

While the answer varies from person to person, the best response I can give is that YES, it has been done with ERP (exposure and response prevention therapy) alone.  In fact, were I pushed to choose between my three daily doses of meds or my 12 weeks of ERP, it would be one of the easiest decisions of my life to choose ERP.

Every person is different.  I have an obsessive-compulsive friend who treats her OCD with only meds– she has never undergone ERP.  The son of one of my blogger friends uses only his tools gained from ERP– no meds.  Then there’s me, a girl who wants(/needs?) a full arsenal to treat her disorder.

So, what will it be for you?

The best treatment is ERP, hands down.  Start there.  See how you do.  If you can find an OCD specialist whom you trust, you may try to fold meds into the mix if you find that you need them.  It’s (unfortunately) a trial-and-error kind of thing.

Will you be okay without meds?  Maybe.  You’ll have to discover that for yourself.
Has it been done before?  Absolutely.

Hope that is helpful!

Betcha they're young
This is the cycle:
I need a new release valve.
Will this pandemic ever end? I'm so tempted to go OFF on people.
If a weekend is not long enough to recupe the spoons I need, then I need to expend fewer spoons during the week.