My chest was so tight. It hurt to breathe. I would wake up panicking.

I went back to my therapist. I made another appointment with my psychiatrist. But when I felt like an elephant was standing on my chest, I went into the doctor.

They don’t play around with this stuff, especially when one’s father has had triple bypass surgery. I had an immediate chest x-ray and an EKG. I just tried not to cry.

But things are fine. I mean, mostly. My x-ray was fine; my EKG was … fine-ish. My doctor felt satisfied with it, but she still wants to run it by a cardiologist.

It’s just stress. Damn. Isn’t it wild what stress can do to our bodies??

She and my therapist both said: focus on breathing.

My doctor also said: laugh. It will open up your chest.

Breathe and laugh. I can do that. Right?

Even my editor told me to rest a little.

That part seems easy enough. All I want to do is sleep. I think I might have some depression issues going on or else maybe this how I get every winter. -40 degrees does little to contribute to breathing or laughing or being joyful.

But– a bright spot– I am reading this tremendous book, The Anatomy of Story by John Truby. I’m only two chapters in and it’s sort of changing my life. It’s such a beautiful, deep, thorough way to look at writing a story. It helps that I’ve been thinking of my story and these characters for about a year and a half. It would maybe be overwhelming to use this book to drum something up from scratch, but this way, it feels really productive and thoughtful. I’m loving it and highly recommend it so far.

I really wish that I could just take a month off of work to take care of myself. But that’s not an option, so I have to work self-care into the nooks and crannies of life. I need to breath, laugh, and rest. Love that prescription!

I wanted to write a little post about writing with an anxiety disorder. I understand that what I’m about to say might sound ungrateful, especially to writers who would give anything to have a book contract. I hope you can take it for what it is: my honest thoughts. I love my editor to pieces. And I love HarperCollins. This post is not about them. It’s about anxiety as a writer, which exists regardless of editor or publishing house. I repeat: this is not about my publishing house. This is about my anxiety disorder.

I have obsessive-compulsive disorder, an anxiety disorder that has been well-managed since 2008 when I underwent intense exposure therapy. In the first year and a half after exposure therapy, my obsessions and compulsions dwindled down to zero. Nothing. Nada. It was this rush of freedom that I hadn’t experienced since I was a child (no really– my OCD kicked in around age seven). In the years after that, it picked up a little bit, but nothing like it used to be.

It was probably a little foolish to think that anxiety was behind me.

In 2012, I started writing the novel that would become my debut, Truest. I had a blast writing this novel– there was no pressure, no deadline. I loved (and still love) the characters and the themes I dove into, and there was no timeline for the book to take shape. If it took four years or five or ten, it was all good because I had a full-time job and was writing for pleasure and passion and calling.

It ended up taking about a year and a half, at which point, I queried literary agents. I was lucky enough to be offered representation within a month or so, a tremendous blessing as querying can sometimes be long and torturous. (And actually, it still felt long and torturous.) My agent is incredible, and he found a home for Truest with HarperCollins only a couple months later, a two-book deal. I was over the moon for this opportunity and still am.

I got my book deal on a Wednesday in November. Two days later, I talked to my (now beloved) editor for the very first time. That night, I had my first panic attack.

In the words of Kurt Vonnegut, And so it goes. 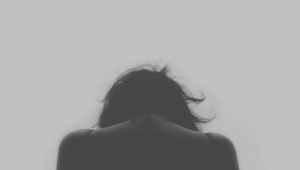 The anxiety that followed in 2014 was so intense and unexpected and alarming that I ended up back in therapy, although not for OCD-related anxiety but for … writing-related anxiety? Was that even a thing? Apparently, for me, it was. And is.

But I battled through it. I cried a lot. I experienced enough panic that I got a prescription for it. I was meeting with a therapist every single week. I prayed. A lot. I had hard conversations with my editor, who was receptive and brilliant through it all. In the end, I had a polished book: Truest, which came out in September 2015 on one of the proudest days of my life. I love Truest. It’s the book I was called to write, and I stand by the decisions I made. I’m so delighted that readers have enjoyed it and that it’s been thought-provoking, something that’s really important to me.

I thought, “Okay, I survived. Now I know what I’m up against. Now I know my editor is on my team. Now I’m armed with resources. I can write another book.”

It was probably foolish to think the anxiety was behind me.

It was on my heels. It is on my heels. It whispers to me that I’m worthless, that I don’t know how to write, that I’m not cut out for this life. And, to be strictly honest, I’m not at this exact moment sure whether I am or not. Not for writing. I love writing and will always write. But for the life of publication. I’m not sure if I’m built for that life.

Writing my sophomore novel has not been the same fun, carefree experience of writing Truest. There are deadlines– and even though they are sometimes flexible, there is a real horror in that flexibility too (What I mean is that there is this fear that you will never produce something of publishable quality again … and so the deadline is perpetually extended, and that obligation is perpetual … is that not its own form of hell?). There’s money that has exchanged hands, and so there is a figurative and literal debt hanging over you. There’s this overwhelming blank slate: my editor bought Truest after reading it, but she bought novel #2 sight unseen, so there’s not that same devotion to it, not that same buy-in, not that same feeling of I-love-this-particular-work-and-want-to-publish-it. It’s like trying desperately to create something that will capture the publishers in the way your first novel did … except that your second novel can’t be too similar to your first. So now you have this request to write something distinctly separate from the novel you know your editor liked … something distinctly separate but something your editor will like regardless. It can feel like living in a paradox. It can feel like you’re a performing monkey.

Sometimes it means that you spend fourteen months on a novel that, in the end, just isn’t cutting it. And you start over. And then, when you start over, a (huge) part of you thinks, “What if I work on this for fourteen months and have to start over?” And when you have an anxiety disorder sometimes you live in extremes and you start to think, “What if I do this over and over and over, and nothing is ever good enough to be published, and I live my whole life in this struggle to produce something quality and I just can’t hack it?”

And when the anxiety ratchets out of control, you might even find yourself resenting writing under contract … you know, that contract that you wanted all your life, the one that made you feel like you won the lottery, the one that you’re still so desperately grateful to have with a publishing house that’s a giant. A giant … and you feel so small, and your books feel so small, and your fear seems so huge. And you think, Oh my gosh, I’m in Honey I Shrunk the Writer: a world and career so much bigger than you feel you could ever be, and the shame and anxiety and pressure and stress just pile up more and more and more.

You wonder: am I the only one going through this?

I asked around, found out that several of my writer-friends had some of the same experiences with their second books too. I don’t know if they also deal with anxiety because they seem to handle it a thousand times better than I do, but maybe that’s because I have a blog that straddles the line between vulnerability and TMI.

But the bottom line is this: I love to write. I am called to write. So I will write.

Will I always write as a career/for publication? Who knows. I’m learning and growing with every experience. Ativan helps. Therapy helps. Prayer helps. Hearing from readers who love Truest helps. Having an editor with a huge heart and a whip-smart mind helps. Having a team of best friends and encouragers helps. Experience helps.

And so it goes.

There’s a famous Dorothy Parker quote: “I hate writing; I love having written.”

Someone recently reminded me of this quote, and I argued back immediately, “No, I love writing itself!”

Here is where I will now contradict myself:

I love writing.  What can be more enjoyable than experiencing magic while it is happening?  To let the keystrokes happen almost of their own accord.  To encounter storylines that I could have never dreamed of on my own.  Or to press hard into a challenge and discover a solution.  This is the brilliance of writing, of being in the minute, of loving each moment as the words fly from you.

I love having written.  Lately, writing has been producing so much anxiety in me.  It’s different than my OCD anxiety though.  It’s more of a fear of the future and a fear of failure.  Part of it is that I’m writing on a deadline again for the first time since college.  Part of it is working on a first draft of a character-driven novel where I’m not certain the characters are strong enough to drive it.  Part of it is that it’s simply what writing is like.

I do know that I need to get my anxiety under control again.  I have a couple ideas:

* Post my First Draft Manifesto in places where I will see it often.
* Start using Valor, a blend of essential oils that’s been called both “a chiropractor in a bottle” and “courage in a bottle”
* Meet with writing mentor for some valuable wisdom on the writing life and how to win the head game [edit: did this and will post about it tomorrow!]
* Give myself grace
* Chat with my psychiatrist about this recent flare of anxiety

Any other suggestions?  My writing life as of late has been like a roller coaster of self-doubt, and I need to get this under control.  In other words, I need to not only love having written … I need to love writing itself.

My friend Anna posted about this on her blog today as well!  Check it out here!