Yesterday on my blog, I introduced you to Mae. Today, her story continues with a detailed explanation of her experience with exposure therapy. (For more information about ERP, go to jackieleasommers.com/OCD). 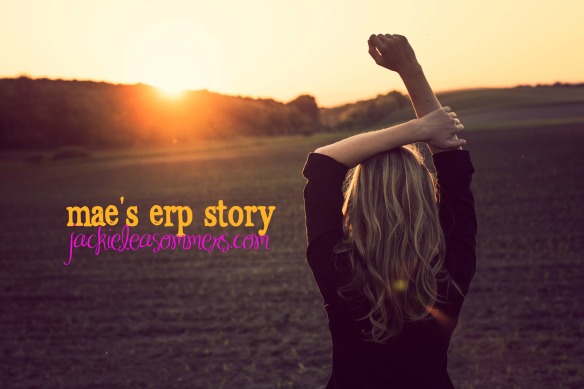 First of all, if you go to a therapist and they tell you that you are not gay or try to tell you that it’s just a fantasy, look for someone else. This person does not understand ERP and OCD. The goal of ERP is to EXPOSE you to your deepest fears. I know that sounds like the most terrifying thing, especially if  your obsessions are causing so much anxiety.

I will continue to reiterate this- ERP CHANGED MY LIFE. I don’t say this lightly AT ALL. I was extremely doubtful when it first began that any change would take place. I was ready to fight this OCD beast, but I was also scared of what exposures I would have to do.

Your therapist will personalize your therapy to YOU.

For me it began with a few different recordings, or scripts that I listened to several times per day. It also consisted of not allowing myself to continually ask for reassurance from family members, or google anything having to do with OCD. Anyone with OCD knows that the Internet is a big, dark, deep hole that is nearly impossible to escape once you enter.

I began by listening to the scripts and trying my damn hardest to not neutralize thoughts (ex: not telling myself “this isn’t me” or “I’m not really a lesbian”). I was supposed to just simply (was it really that simple?!) listen to the scripts. The first one began with my therapist recording a script in his voice. I listened to this script as much as possible over the course of 2 weeks (5-10 times per day). Some moments it didn’t cause much anxiety at all; at other moments it was EXCRUCIATING. Sometimes the anxiety was just my mind racing, while other times it was a sinking feeling or my chest would get tight. Sometimes, I just cried.

The next script was one in my voice. This one was a little more convincing and harder to listen to… I listened to this one for about 2 weeks as well.

After four weeks of scripts, my therapist and I came up with some “real-time” exposures. For instance, I didn’t avoid any articles that I saw on the Internet regarding homosexuality. I was supposed to read them or at least acknowledge them. I honestly had never really had issues with homosexuality or gay people before this thought popped into my life. I also didn’t have my heart skip a beat or a queasy feeling in my stomach when I would see any kind of news story on homosexuality before this obsession wreaked havoc on my life.

I also had to sit with different thought patterns I had. If I was with a same sex friend that I found attractive, I was supposed to just let my mind wander and let the thoughts be there. I wasn’t supposed to neutralize them or reassure myself.

I went to the gym a lot and if I thought a woman’s butt was hot, I was supposed to  just appreciate her beauty and not doing anything else with the thought. The gym was probably the hardest exposure for me because there were so many different variables. I wouldn’t know who would be there on any given day. For awhile I even avoided a class taught by someone who is openly gay. I thought going to her class would make me suddenly “become a lesbian” or she would know I was having these thoughts…

It wasn’t until about my tenth or eleventh session that I actually noticed my thoughts shifting. I went to 14 ERP sessions. It all depends, but my therapist said ERP can be anywhere from 10-20 sessions.

I am going to list a few things I that have improved in my life since ERP:

1. SLEEP!
2. Being present with friends and family (I felt like I was in a continual fog for quite a few months).
3. An enjoyment of begin at the gym, work, stores with out feeling like I am constantly checking between people.
4. The ability to read a book or watch a show without thoughts/obsessions/compulsions taking over.
5. Weight- I honestly kind of appreciated losing weight at first, but then it became real sucky to not enjoy food at all.
6. A renewed faith in God. I was very, very angry at God for quite some time. Mental illness is no joke. People don’t talk about it and its a very real thing to so many. My brother has struggled with a wide variety of OCD themes since he was 11. This journey has actually made us a lot closer.
7. I have become more “selectively vulnerable.” If I notice someone seems to be struggling, I gently ask some questions. If anxiety, depression, etc. come up I tell them a piece of my journey. I KNOW that my story has been used to impact others. Also, Jackie Lea’s vulnerability helped me to get help. We are all part of this OCD/ERP puzzle.
8. Work- I enjoy my job so much, but during this struggle it was really difficult for me to focus. I actually feel like I have improved at my job since ERP.
9. I’ve embraced the fact that each day is new. You might still experience setback, frustrations, fear, doubt… Yet, each moment and each day are new.
10. People with OCD have been said to be some of the most intelligent and creative people. I will own that. 😉 For real though, I’ve started doing more creative art projects to really hone in on that gift that I’ve been given. I’ve also looked at my “steel trap” memory as an asset instead of a curse. During my darkest days of OCD, I would get so incredibly frustrated by my ability to recall the most random, detailed memories in my life. Now, I use this skill to make people feel valued and honored by acknowledging important details about them.
11. Sex is something I look forward to now. For a period of time, I was going through the motions in every area of life. I actually feared sex with my husband  because I was worried that the thought would pop in during something that was supposed to be enjoyable.

12. Our family went on a big trip this past year and I was honestly dreading it all year. I thought it would be awful. The trip was actually planned right around the time OCD kicked in. I thought, “There is no way I will be doing better in a year.”

With the trip, I was worried about being away from home, I was concerned that OCD would creep back in with its ugly tactics, I thought that OCD would rob me of experiences on a trip that was intended to be lovely. Guess what?! I had a great time on the trip. It was lovely. I enjoyed it so much, which I consider a huge victory.

I want to once again clarify something. OCD will not completely disappear for many people by doing ERP. What it will do is rewire your brain. I would say my symptoms have improved by 85-90%, which is HUGE. The times that OCD likes to sneak back in are when I am stressed, tired, or duing my menstrual cycle. During these times, I remember to do lots of self care. I make sure I set healthy boundaries, take walks, baths, whatever feels best at that time to make sure I am ok.

Note from Jackie: Thank you for sharing, Mae! I would love to interview someone with HOCD who is homosexual, as HOCD effects both straight and gay people. Both of the people I’ve interviewed so far on this blog have been straight. If you are gay and have struggled with HOCD (in which you doubted your homosexuality and feared you might be straight) and have underwent exposure therapy, contact me! I’d love to feature your story on my blog– anonymously, if you prefer!