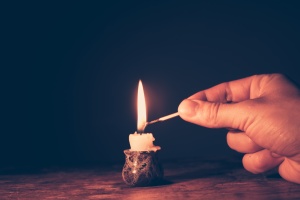 How does an idea become a novel?

First, you throw away the match. Then you hold the idea in your hands like a flickering flame. You protect it and you breathe life into it: research, conversations, prayer.

You put flesh on it. That is, you create characters. You make them look like real people, broken and complicated, and you make them want things.

Then you look around and see where this idea is happening.  In space? In post-apocalyptic London? In a dollhouse? You open your fist and let your idea and your characters start to run around in this new terrarium. With any luck, they will make very bad decisions.

Then you write about it. Pen and paper, laptop, 1921 Woodstock typewriter, whatever you’ve got. Start putting the words down. They’ll be bad at first, but you’ll fix them later.

After 20 drafts or maybe 220, you take off your beret and put on your marketing hat and hammer out a query letter and find an agent. If the agent likes the 220th draft, he or she will probably ask you to write the 221st, and then they take it to some editors, where your manuscript bats its eyelashes and sucks in its tummy and tries to walk the runway without falling.

If an editor is sufficiently besotted by your story’s showing-off, then the editor will give you a contract, after which, you’ll write even more drafts. Those characters that seemed so fun and clever and charming, albeit broken and complicated and wanting, might start to get on your nerves, but there was no pre-nup, and you lose it all if you divorce them now, so you stay with them and learn to love them again.

Eventually, the story goes through copyedits and formatting, and it gets a cover and a release date, and by then, you’re all starry-eyed over your sweet little idea and characters and story terrarium that you start thinking about all the evil people who might not care about them the way that you do.

But it’s too late. You’ve written a novel, and it gets to go out into the world, and your job is to light another match, keep the flame safe, and make magic. Again.

5 thoughts on “From Idea to Novel”