Random 5 Friday is a weekly meme over at A Rural Journal.

Today I want to tell you about the shows I grew up watching!

1. Rescue 911.  Narrated by William Shatner, baby.  Is there something strangely gruesome about three kids who would hustle through baths and into pajamas in time to watch a show reinacting crimes, injuries, and accidents?  We loved it.  And we especially loved the end where Shatner would say, “Next time, on RESCUE ………………………………………… 911.”  The pause was Seacrest-worthy. 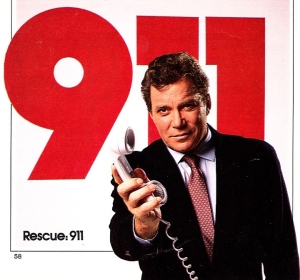 2. Dr. Quinn, Medicine Woman.  I can’t have been the only young girl with a devastating crush on Sully.

3. Square One TV.  My siblings and I didn’t even realize we were being tricked into learning math.  The best part of this show was the last 10-15 minutes, featuring MATHNET, where two mathematicians solved crimes.  (It was like the original NUMB3RS!)  My sibs and I geeked out on MATHNET, pretending to punch details into our fake calculators right along with the investigators, and doing a three-way high-five when we’d solve a crime.  George Frankly was the name of the male investigator.  Over the years, he had two female partners: Kate Monday and Pat Tuesday.  And no, I didn’t have to look any of this up either. 🙂

4. Ghostwriter.  WORD!  “He’s a ghost, and he writes to us.  Ghostwriter.  What a trip!”  Another mystery-solving show, this time featuring a team of kids from the city solving cases with the help of a ghost who could read.  Again, tricked into learning!  Gotta love it!  My sister even carried around a “case book” and wrote to “GW.”

5. Boy Meets World.  Heck yes.  Shawn, Corey, Topanga and gang were featured in the show to watch in junior high and high school.  Did you know that there is a companion series coming out soon called Girl Meets World, featuring Corey and Topanga’s daughter?  Danielle Fishel and Ben Savage are returning!

What were your favorites?

17 thoughts on “TV Shows of my Youth”