As I pursued the right cocktail of medication to help treat my obsessive-compulsive disorder, I encountered my fair share of side effects.  My vision would black out.  I had jello-legs.  Dizziness in spades.  Rapid weight gain.  Tremors.  Drymouth.  Lethargy.  Excessive sweating.  Lactation (yes, really).

But perhaps the most frustrating side effect was the blocking.

Blocking is a form of stuttering– but probably different from what you’d imagine.  It’s not the usual “t-t-t-t-today, junior!” where repetition features heavily.  It’s where your mouth physically stops from saying a word or syllable.

I found this description online, emphasis mine:

Blocking is not usually present in normal dysfluency and, as such, it is a principal indicator of stuttering. Blocking typically occurs when two articulators come together with excessive force, e.g. when the two lips come together to form the consonant sound ‘b’, as in the words book, boy and Bob. Rather than parting the two articulators rapidly and easily, the speaker is unable to release the contact between them and a great deal of tension may build up. In severe cases a speaker may be unable to release a blocked sound for around 5-10 seconds. Owing to the adverse effects on the person’s breathing – because the person is typically holding their breath during a block – talking can become quite exhausting. In addition, the sense of fatigue when speaking can be exacerbated by the increased muscle tension around the head and neck area and in the chest.

I’ll try my best to explain what would happen to me.  In the middle of speaking, my tongue (especially the base of it) would seize, and I would be physically incapable of saying the word for several seconds.  My mind has always worked faster than my mouth, but this was out of control.

The words were there but unable to come out of my mouth.

Not gonna lie, I’m a good speaker.  I’m articulate, and I can hold an audience’s attention.  For my job, I do a fair amount of public speaking– presentations at churches, schools, etc.– and it’s an area in which I feel confident.

All of that was stolen from me with the blocking. 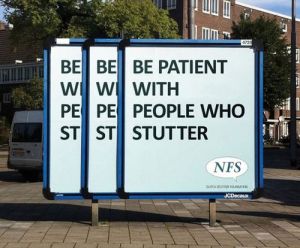 I was suddenly terrified of speaking opportunities, felt silly even in one-on-one appointments when I couldn’t just SAY. WHAT. I. WANTED. TO. SAY.  It felt like one more thing OCD was stealing from me– not just my public speaking ability, but my confidence.  I was so frustrated and shed a lot of tears around this time.

Thankfully, my brilliant psychiatrist knew what was causing the blocking (for me it was a too-high dose of Risperdal), and once he reduced it (I now only take half a milligram daily!), the blocking went away.

At a writing conference Q&A, a man in the crowd asked several questions, and his phrases were filled with blocking.  It was even on the same letters as me– b’s and p’s, those darn plosives!– and as he spoke, I could almost feel my tongue freeze inside my mouth, feeling like a thick, inoperative muscle– a weapon against me instead of for.

7 thoughts on “Side Effects: Blocking”