I’ve been reading a lot lately, hooray! I’m not even joking when I say that The Wrath and the Dawn by Renee Ahdieh seriously messed me up in the greatest way and I couldn’t really read anything for a couple months– with the exception of The Horse and His Boy. Twenty times. I’m not joking. I think I listened to the audiobook about twenty times in a row.

Now that I’m back in the swing of things, here are a few other books I’ve recently read:

A Court of Thorns and Roses by Sarah J. Maas | This was my first Sarah J. Maas book I’ve read, even though I own the books in her Throne of Glass series. This is a re-telling of the Beauty and the Beast tale, set in a faerie world. It was romantic and kinda darkly sexy; the big twist came near the end, and I liked that. I’m not sure yet if I’m going to continue the series or not. Pretty sure a love triangle is going to pop up in the next book, and I really don’t want it to, not with these characters. Even though I had a tougher time connecting with Feyre, the main character, there is a lot of love for this book out there, and I’d love to discuss it with you, should you read it!

What I Thought Was True by Huntley Fitzpatrick | This was a very engrossing read … could not put it down! It’s a story about Gwen Castle, an “island girl”– she’s one of the poor people who live on the island year-round, while in the summer, the rich people come to stay in their summer homes. This summer, though, rich-boy Cassidy Somers (awesome name, woot!) is working on the island too– and he is Gwen’s “mistake from last spring.” It was really fun to get to know Cass and Gwen and let them battle through their issues on the island. One of the things that I love about Huntley Fitzpatrick’s characters is the way that they talk through things with each other, even when they are awkward conversations. I love that she gives them the maturity enough to do that. I really loved this book. I can’t believe I get to be on a panel with Huntley Fitzpatrick this weekend. (Is this real life??)

Emmy & Oliver by Robin Benway | Loved this story! Emmy and Oliver were best friends up until age seven, when Oliver was kidnapped by his own father. Ten years later, he comes home. At first, things are really awkward between them– Oliver barely remembers his former life, and he’s been told lies for the last ten years, not to mention that he still adores his dad, who is now in hiding, and is trying to wrap his head around his dad as the bad guy. But they begin to warm to each other, and of course this is a love story. It was very sweet, very thought-provoking, full of emotion, and I highly recommend it! 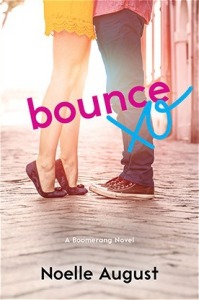 Bounce by Noelle August | Noelle August is, of course, the pseudonym for the partnership between Lorin Oberweger and Veronica Rossi. To me, this was the most interesting book of this series. It’s about nineteen-year-old Grey, a partying wannabe rockstar, and Skylar, an up-and-coming actress cast in the movie that Grey’s brother is working on. They have to read lines together, and of course there’s a kiss, and of course the kiss doesn’t feel like acting. 🙂 It was just a sweet, sexy romance that I read in one sitting. One of the reasons I think I loved it so much is that Skylar is a size twelve (and having to lose weight for the movie), but anytime we see her through Grey’s eyes, she’s so perfect. And not in spite of her weight, but because of it. The descriptions were spot-on and lovely and made this book so unique. A fun, charming read.

1 thought on “(Even More) Recent Reads”