I just finished City of Heavenly Fire, the sixth and final book of The Mortal Instruments series by Cassandra Clare. This book definitely wasn’t my favorite of the series (I’m always bummed when the final book of a series isn’t my favorite). But I love Cassie Clare’s characters and wit and there was no way I wasn’t going to finish the 725-page behemoth.

Not THAT spoilery items:

A couple things that were tough for me: 1) most of the book took place in Edom/Hell, so … that’s dark, 2) the ending was sad … but then when it was “corrected,” it made me wonder what the point of the sad part was, 3) I haven’t read The Infernal Devices series (the prequel trilogy to this series), and so I missed out on some of the “Easter eggs”– to be clear, I didn’t miss them: I knew I was supposed to be feeling something big, but I couldn’t conjure those big feelings because I am unfamiliar with the series, so … that was not effective for me, 4) this book really, really set up the subsequent The Dark Artifices series, and while I was quite fascinated by the new characters introduced, I’m not sure yet if I’ll read the series, and so it felt a little like in High School Musical 3, where everything is noticeably getting teed up so that the next thing can hit a home run.

And now, a VERY spoilery item:

You have been warned.

Are you still scrolling down?

Okay, then it’s your fault if you’ve kept going.

Not that you’ll be that surprised by this, to be honest.

I mean, I think we all knew this would happen.

Jace and Clary had sex. In a cave in hell. And Tumblr is being hilarious about it. 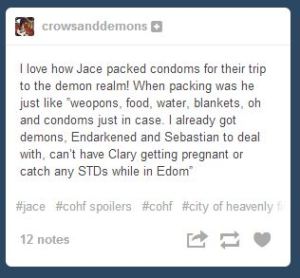 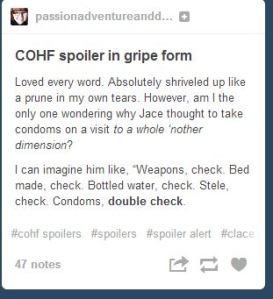 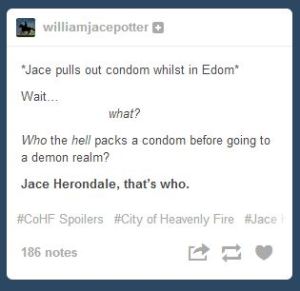 Tumblr really cracks me up.

Also, to be clear, props to CC for the safe(r) sex.

2 thoughts on “City of Heavenly Fire: SPOILERS AHEAD (Mostly Just One)”