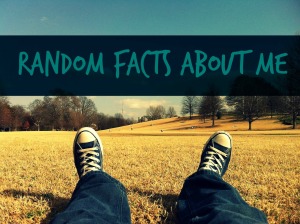 1. I talk to strangers. A lot. Sometimes I even tell them super random things that I’ve been thinking. I usually think this is going to bond me and said stranger. It doesn’t always work that way.

2. My toy of choice growing up was My Little Ponies. Note: I’m talking the old-school MLP, not the new, creepy, weird-looking ones. The ponies of my heart are the originals: Gusty, Applejack, Heart Throb, Wind Whistler, Lickety-Split, Posey, Morning Glory, Firefly, Medley. Sidenote: when my sister needs help, she writes to me, “SOS sea ponies!”

3. I don’t like to drink orange juice from a cup that will become a weird color because of the orange juice: it should either be clear or opaque.

5. I played trumpet for eight years and was first chair in my high school band. I was also voted “Most Musical” in my senior class.

6. My first “celebrity” crush was probably Cal Ripken, Jr. I still love Cal and was lucky enough to go to his 2000th game and was thisclose to meeting him (I was next in line for an autograph when he had to warm up in the outfield– boo!).

7. I am not spontaneous about my plans– my friends know not to spring things on me. (Though I have been known to embrace spontaneity for cherished pals.)

8. I don’t drink coffee or alcohol at all.

9. It was a really big deal to me when I finally realized my favorite color was red. But now I think it has switched to purple (dark, eggplant purple), and again, it felt like a techtonic shift.

10. While my Minnesota accent isn’t the strongest one I’ve ever heard, it can still get pretty bad. It’s the O’s. Mine stretch for miles.

Tell me a random fact about you!

Image credit: Unsplash, modified by me

7 thoughts on “10 Random Things You Never Knew About Me”